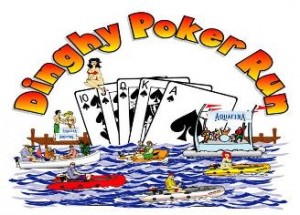 It's time for the 6th Annual Dinghy Poker Run and BBQ with Live Music!

Come for the Day to Play!

Participants of all Ages are Encouraged

Everyone is welcome... Shore & Country, South Norwalk Boat Club, Rex Marine, Norwalk Boat Club, Ischoda YC, Norwalk YC... Come on down!  Dinghys, Jet Skis or kayaks are allowed (squirt guns and water cannons are encouraged).   Join your friends and enjoy a fun day on the water !  There will be 5 card pick-up checkpoints around the harbor. Collect a playing card (in an envelope) at each checkpoint. Bring the envelopes back to the finish and find out what hand you have for a prize !

Registration is between 12:30pm-1:30pm at the Norwalk Cove travel lift pit.

BBQ, featuring clams/oysters donated by Copps Island Oysters in addition to the famous Cove Burgers / dogs starting at 6:00, with Live Music until 9:30 by "The Take" from Westbrook and announcement of the winner & prizes.

Entry fee is $5 per ‘hand’ and multiple hands per dinghy are allowed.

You are invited to also participate in a 50/50 Raffle (held during dinner time) to promote Harbor Watch - Norwalk  Info... HERE

If you can't participate in the Poker Run, stop by for a burger and the PARTY !  Plan to stay for the day.

No Rain Date – If weather is an issue we will still have the dinner & live music at 6:00pm in one of the sheds !

There is a $ 5 cash entry fee per contestant…and there can be multiple contestants in each dinghy.  Entry fee will be collected at registration.

1. Participants of all ages are encouraged to join in on the fun. Children under the age of 13 must be accompanied by a parent or guardian and wear a PFD.
2. All participants must register on the event day in order to receive their cards at each checkpoint. Registration and the start will be at the Norwalk Cove travel lift pit.
3. Participants must adhere to speed limits and no-wake zones as well as proceed with caution in congested areas and in the channel. NOTE:  This is a run…not a race and there is no benefit to finishing ahead of everyone else.    Safety  First !!
4. Plan on having a full tank - this year's new extended course will be longer!
5. All participating watercraft must have proper safety equipment, (kill switch lanyards are recommended) and must follow all boating safety regulations.
6. It is suggested that all participating watercraft carry a VHF radio and monitor VHF channel 68 (Not required).
7. Water guns are allowed (and encouraged) however, mechanically powered water cannons and water balloons are prohibited during this event.
8. Approach each checkpoint with your watercraft under control.
9. Tie-ups may be required at some destinations so please have 2 dock lines (1 fore and 1 aft) pre-rigged.
10. Maps of the card pick-up locations will be provided upon registration.
11. Participating boats are not to exceed 16’ in length.
12. All boats must start the race together upon starting signal. No departures before assigned start time.
13. Multiple poker run hands are permitted per participant / dinghy
14. Only sealed envelopes containing your cards will be accepted at card submission judging. Do NOT open the envelopes containing your cards. This must be done in the presence of an event judge.
15. Prizes for top three best hands will be awarded based on the “Winning Hand Guidelines” below. Decision of the event official is final.
16. Each participant is required to sign a waiver upon registration in order to participate in the event.

Procedure for Obtaining Cards at Checkpoints: At registration, each participant will be given five checkpoint passes, a map and instructions in a zip-lock bag. Please use the markers provided at registration to write your name and phone number on your zip-lock bag. Each checkpoint pass is identified by color. You must go to each checkpoint as indicated on your map and can do so in any random order.   For example, if you start at checkpoint red, once there, hand your red checkpoint pass to the official and in return, you will be handed a sealed envelope labeled "red", containing your first poker card.  DO NOT OPEN THE ENVELOPE! Place it in the ziplock bag, seal the bag and continue on to your next checkpoint until all checkpoint passes have been exchanged for cards. (5 in total.)  If you have more than one registered player in your watercraft, they will need to have their own set of checkpoint passes to redeem for their playing cards. Once completed, put your dinghy/ PWC/ kayak away and return at 5:30 to the landing at Cove between B & C dock to submit your hand(s).

Poker Hand Ranking There are 52 cards in the pack, and the ranking of the individual cards, from high to low, is ace, king, queen, jack, 10, 9, 8, 7, 6, 5, 4, 3, 2. There is no ranking between the suits – so for example the king of hearts and the king of spades are equal. A poker hand consists of five cards. The categories of hand, from highest to lowest, are listed below. Any hand in a higher category beats any hand in a lower category (so for example any three of a kind beats any two pairs). Between hands in the same category the rank of the individual cards decides which is better, as described in more detail below.

Winning Hand Guidelines Hands are judged according to the following guidelines listed in order from best to worst hand based on 5-Card Stud Regulations. Since it is possible to get a five of a kind, if a five of a kind should occur, it will beat all of the traditional poker hand rankings as outlined below. (Highest five of a kind is top hand.) If a tie occurs with a four of a kind, three of a kind, two pair or one pair, the tie will be broken using the next highest single card held in each hand.   Any ties that cannot be broken using cards held will be handled by the team’s choice of either splitting the prize money or breaking the tie using the highest cut of the deck. 1. Royal Flush – This is the highest poker hand. It consists of ace, king, queen, jack, ten, all in the same suit. As all suits are equal, all royal flushes are equal. 2. Straight Flush – Five cards of the same suit in sequence – such as J-10-9-8-7. Between two straight flushes, the one containing the higher top card is higher. An ace can be counted as low, so 5-4-3-2-A is a straight flush, but its top card is the five, not the ace, so it is the lowest type of straight flush. The cards cannot “turn the corner”: 4-3-2-A-K is not valid. 3. Four of a kind – Four cards of the same rank – such as four queens. The fifth card can be anything. Between two fours of a kind, the one with the higher set of four cards is higher – so 3-3-3-3-A is beaten by 4-4-4-4-2. If you need to compare two fours of a kind where the sets of four cards are of the same rank, then the one with the higher fifth card is better. 4. Full House – This consists of three cards of one rank and two cards of another rank – for example three sevens and two tens. When comparing full houses, the rank of the three cards determines which is higher. For example 9-9-9-4-4 beats 8-8-8-A-A. If the threes of a kind were higher, they win. 5. Flush – Five cards of the same suit but not in sequence. When comparing two flushes, the highest card determines which is higher. If the highest cards are equal then the second highest card is compared. If those are equal too, then the third highest card, and so on. For example K-J-9-3-2 beats K-J-7-6-5 because the nine beats the seven. 6. Straight – Five cards of mixed suits in sequence – for example Q-J-10-9-8 (in varying suits). When comparing two sequences, the one with the higher ranking top card is better. Ace can count high or low in a straight, but not both at once, so A-K-Q-J-10 and 5-4-3-2-A are valid straights, but 2-A-K-Q-J is not. 5-4-3-2-A is the lowest kind of straight, the top card being the five. 7. Three of a Kind – Three cards of the same rank plus two other cards. When comparing two threes of a kind the hand in which the three equal cards are of higher rank is better. So for example 5-5-5-3-2 beats 4-4-4-K-Q. If you have to compare two threes of a kind where the sets of three are of equal rank, then the higher of the two remaining cards in each hand are compared, and if those are equal, the lower odd card is compared. 8. Two Pairs – A pair is two cards of equal rank. In a hand with two pairs, the two pairs are of different ranks (otherwise you would have four of a kind), and there is an odd card to make the hand up to five cards. When comparing hands with two pairs, the hand with the highest pair wins, irrespective of the rank of the other cards – so J-J-2-2-4 beats 10-10-9-9-8 because the jacks beat the tens. If the higher pairs are equal, the lower pairs are compared, so that for example 8-8-6-6-3 beats 8-8-5-5-K. Finally, if both pairs are the same, the odd cards are compared, so Q-Q-5-5-8 beats Q-Q-5-5-4. 9. Pair – A hand with two cards of equal rank and three other cards that do not match these or each other. When comparing two such hands, the hand with the higher pair is better – so for example 6-6-4-3-2 beats 5-5-A-K-Q. If the pairs are equal, compare the highest ranking odd cards from each hand; if these are equal compare the second highest odd card, and if these are equal too compare the lowest odd cards. So J-J-A-9-3 beats J-J-A-8-7 because the 9 beats the 8. 10. High Card – Five cards that do not form any of the combinations listed above. When comparing two such hands, the one with the better highest card wins. If the highest cards are equal the second cards are compared; if they are equal too the third cards are compared, and so on. So A-J-9-5-3 beats A-10-9-6-4 because the jack beats the ten.