Ospreys in the Harbor 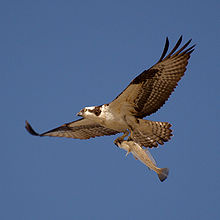 Even if you have no interest in birding, it would be hard not to notice and admire the Osprey's throughout the Norwalk area. There are approximately 20 nests beginning up the Norwalk River near the I-95 bridge , on the flashing green rock pile #1 (aka "buglight") off of Vet's Park, another on a pole at Calf Pasture Beach behind the Cove administration buildings and a few surrounding the old power plant on Manresa Island.

The nest that's most visible and entertaining is on the roof of the dockhouse of the Sheffield Island visitors ramp. Every time the Sheffield Island ferry comes to the dock or a boat comes too close, the ospreys will circle, chirping and shrieking to chase the intruders away from the nest... every, single, time!

Watching as one, struggling to gain altitude after snagging a large fish, was attacked by a jealous seagull, hoping to win the fish.  The Osprey's partner, circling overhead, went into a steep dive and clipped the seagull in mid air, scaring him off. An incredible display of nature, right in our own back yard ! The Osprey's, who migrate as far as South America during the winter, can grow as large as 24" long with a 71" wing span ! On the endangered list during the early eighties, their population had dwindled to 150 nests between NY and Boston. Their population has recovered as a result of bans on DDT and insecticides, though they are still considered "Special Concern" status.

Here's some info from www.allaboutbirds.com:

Size & Shape:  Ospreys are very large, distinctively shaped hawks. Despite their size, their bodies are slender, with long, narrow wings and long legs. Ospreys fly with a marked kink in their wings, making an M-shape when seen from below.

Color Pattern:  Ospreys are brown above and white below, and overall they are whiter than most raptors. From below, the wings are mostly white with a prominent dark patch at the wrists. The head is white with a broad brown stripe through the eye. Juveniles have white spots on the back and buffy shading on the breast.

Behavior: Ospreys search for fish by flying on steady wingbeats and bowed wings or circling high in the sky over relatively shallow water. They often hover briefly before diving, feet first, to grab a fish. You can often clearly see an Osprey's catch in its talons as the bird carries it back to a nest or perch.

Habitat: Look for Ospreys around nearly any body of water: saltmarshes, rivers, ponds, reservoirs, estuaries, and even coral reefs. Their conspicuous stick nests are placed in the open on poles, channel markers, and dead trees, often over water.