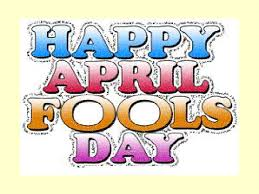 Thank you for laughing with us !

We hope you have enjoyed our "Fishtails"

If you missed the 2017 April Fools Edition, click... HERE

The story of the Power Plant is..... HERE

(This is the one that had a lot of people fooled - and caused an uproar!

See some of the hundreds of comments we have received below:

As for my wife and me, no apology needed — we thought this was the most creative, interesting and best April Fools surprise we have seen in a very long time!

We must admit, we were just gullible enough to be taken in at first — until we reread and notice on our second read, in plain red ink at the top, “April Fools Edition.”

So, we howled with belly laughs at the audacity and wit — and at the sure knowledge of the writers that some readers like us might be a little too quick and skip over the red ink, at first!

Thank you for one great April Fools joke. Too bad some of it was only a joke.  Some parts the fictionalized news deserve to be a vision and maybe a reality, oh I don’t know, like maybe the High Speed Ferries!

And this is coming from a tenant of “B” dock.  We are missing our “Boneyard”/Cove-by-the-Sea” slip already!

I would like to think that “a joke a day keeps the Alzheimers doctor away.”   But even if I’m wrong about this, who doesn’t need a few more laughs for optimal health, happiness and joyful living down by the sea?

Are you kidding me?? How highly insensitivity, how rude, crude and just so inappropriate. I’m highly insulted and laughing my ass off.

Life’s too short we need more laughter and less stress. By the way screw the sailboats…. they should be out on the water anyway.

No need to apologize. Everyone should have seen it was an April Fool’s joke when they got to the end and saw the photo and caption “how to get under the bridge on April Fool’s day”

Thank you for some humor – as we get to the end of this long winter and anticipate a good boating season!

I enjoyed the newsletter, perhaps if someone did not understand the nature of it (a joke) they shouldn’t be sitting behind the wheel of a boat !!!!!

For what ever it’s worth coming from me…..i got a real hoot out of the April Fools Edition of Harbor Talk.

It was sent out on a Tuesday, not the usual Thursday, and on April first.  I thought it was great fun while it lasted.

Good grief, no apologies needed. It was fun. What’s the matter with these old poops? You should have added that the newly refurbished Rex store was going to be converted to “Mike’s Bar & Grill”. Now that would have gotten some reaction!

Personally I thought it was Hilarious, totally made my day. I’m still sharing it with people and laughing every time I read it.

Ah, I was looking forward to the tattoo parlor and wet t-shirt contests Saturday nights.

I thought your April fools edition (clearly titled as such) was good humored. I’m a little disheartened that folks are so wound up that they can’t see a joke even when it’s titled Aprils Fools Newsletter.  They probably read the comics and complain that Dilbert’s boss should reprimanded.

Please don’t feel bad. It wasn’t a mistake or in bad taste.  It was funny.

Thanks for the laugh.

That’s disappointing, I was ready to sign up for Flair Craft training !

Even a half wit like me figured it out.  Although I was thinking to apply for a ferry boat drivers job….

I’m shocked that an apology was in order for some innocent, good humor fun. One would think boating brings together individuals with a casual attitude and a sense of tongue in cheek. Guess not. Certainly the winter has taken its toll on a few.

I am hoping that your apology email is tongue-in-cheek, and that no one really complained requiring you to issue a serious apology.    Don’t listen to any fuddy-duddies!!!   It was fantastically funny!!!    Keep up the good April 1 work in the future!!!

Omg   I knew there was going to be those people out there with no sense of humor but really….     An apology letter ?!

With your position, and the fact that your slips are pre-paid in full … you would be well advised not to pull this shit again. I do not have a sense of humor when the firm I have just written a check for $2,500 uses their “letterhead/official email communications format” to screw with me. I do not read fine print on blogs; I read the headlines.  I forwarded your “joke” on to others that boat thinking it was accurate – due to the format and that it was from you. If I were a Gardella, you would be reading the classifieds.